Find out how taking part in the Seeds, Soup and Sarnies community growing schemes in Cornwall and Middlesbrough has helped families learn skills, make friends, taste new food and get some fresh air.

Eleven-year-old Adam was one of the first people in Penwithick, Cornwall, to get involved with Seeds, Soup and Sarnies – and has been instrumental in spreading the word to others in the community.

Every morning he’s up early to tend to the plants on his allotment before he goes to school. He’s justifiably proud of his potatoes, carrots and beetroot, but says ‘next year I’m going to organise the garden much better so I can fit in a lot more different vegetables to take home and cook.’

Young mum Rachelle had lots of memories of growing food as a child, but had ended up living on a street in Middlesbrough with a lot of concrete and not much greenery. When she found out about Seeds, Soup and Sarnies at the local Sure Start centre she hadn’t worked for a year and says it has given her a new lease of life.

‘I was just in the house doing nowt really, and I haven’t got a garden myself; I’ve just got a yard.’

She’s now tried her hand at growing strawberries and flower baskets in planters in her small outside space, as well as herbs. ‘Before this I didn’t really use herbs, I wouldn’t have known what to do with them. But now they go into everything, and it makes such a difference having all that flavour.’

Rachelle says she’s made loads of new friends through the scheme and that her trip to Cornwall to visit other Seeds, Soup and Sarnies growers meant that little Tilly-Ann got her first sight of the beach.

Hakeem and his family are originally from Nigeria and moved to the UK eight years ago. He’d regularly grown his own food there, but found the English soil somewhat different! Through the programme he has developed new techniques and new crops to grow.

He says: ‘At the group I found out about the lettuce and the radish, which I didn’t know about before. I have grown some other things before, like corn, but the project has really helped me learn more about foods and how to grow them here.’

During their visit from Middlesbrough to the Eden Project in spring 2012, where he met Cornish families taking part in Seeds, Soup and Sarnies, he and his wife shared traditional African dishes using plantain and yam.

Mum Rhea and her two children were inspired to join Seeds, Soup and Sarnies in Cornwall after hearing about it from a friend.

She explained: ‘There’s nothing really for the kids where we live, so I thought it would get them interested in doing something that could benefit us.’

Inspired by the gardening group’s meetings, Rhea started doing bits and pieces in her own garden, where she used her newfound know-how to grow radishes, strawberries and herb. When her garden got a bit too packed, she jumped at the chance to use a section of the group’s nearby allotment.

‘I’ve been growing cucumber, potatoes, cabbages, carrots, peas, Chines gooseberries and celeriac. With the group we’ve been making chilli jam, soda bread, potato salad and bird feed for over the winter. We also learnt a lot about preserves and pickling stuff so that you can have it later in the year.’

A lot of her spare time is now spent at the allotment, which she says is peaceful and good for getting exercise. She does admit that the slugs have been a bit of a pain, eating ‘anything and everything!’ but says that next year her plan of attack is to make a beer bowl to trap them in.

Rhea feels the programme has been great for the kids too: ‘Taygen is only two and she knows what a radish is. It’s rubbed off on everything at home. Most of the tips I’ve had have been from my Dad; it’s all generations. He’s really shocked I’ve got into it, but he loves sharing tips. I love it, I do.’ 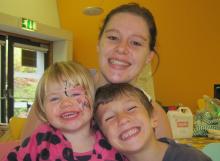 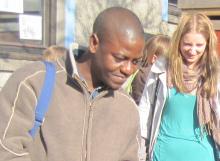 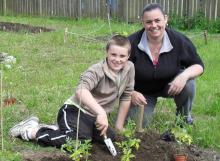 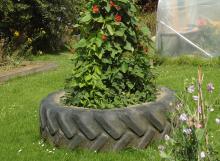 Before this I didn’t really use herbs, I wouldn’t have known what to do with them. But now they go into everything.

The project has really helped me learn more about foods and how to grow them. 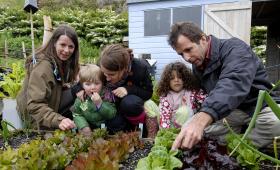 See our community growing and cooking projects in action.

Get inspiration from others and share your growing tips and family recipes.

Find out what everyone's up to and get growing ideas from our friends.